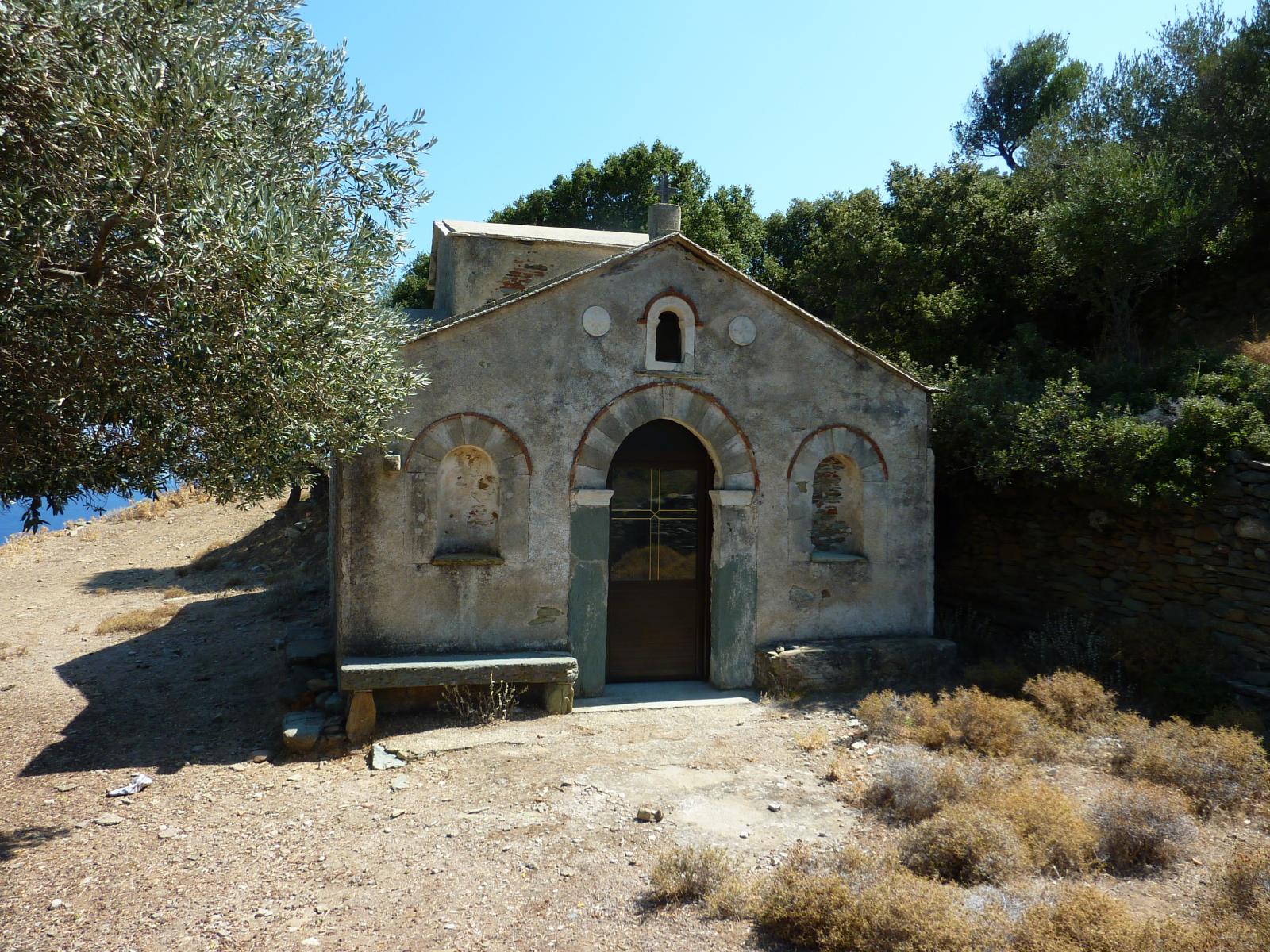 On Sunday 1/9/2013, SPPENK (t/n: Society for the Protection of the Environment of South Karystia) organized a hike from Aktaio to Filagra, with the participation of 20 members and friends of the association. With the hikes, the association wants to give the opportunity to those who are interested, to know the unique nature of Karystia, as well as the works of traditional culture and the ruins of the past.

The route by car from Steno to Aktaio has an impressively dense forest vegetation of evergreen oaks, holly and heaths. The scattered houses of the village seem to hang over the steep shore with the sea always buzzing restless.

The hike starts from the church of the Assumption of the Virgin Mary on a clear path that descends to the coast in the direction of Giannitsi. The rich vegetation and the blue of the sea in the background flood the eyes. Soon we meet an old half-ruined farmhouse in Afrati and a little further, a threshing floor that looks like a balcony over the sea. The path continues downhill and just below, is a spring with a cistern. The old farmers had built terraces that were once cultivated creating a paradise in the arid landscape. Farther from the path, we can see a few shepherds' huts that still retain their earthen roof and are still in use.

After the spring, a short distance away, we meet the Byzantine church of Agios Ioannis the Theologian, which stands like an elegant work of art in the silent landscape. The church has been built on the ruins of an older church of the same name, that dates back to the years of Frankish rule. The original church was larger than the newer one and had a dome, at some point it seems that it was ruined and built from the beginning probably during the Turkish occupation and more recently in 1944. The existence of a Byzantine church in the desert is probably explained by the fact that the area around Giannitsi (Ioannikion) presented religious activity in the early Byzantine years and had become a pole of attraction for monks. From the original temple, only the foundations of the sanctuary arch and some stones on the side walls survive. The last reconstruction of the temple, which we see today almost intact except for the doors, was done with poorer means, partial use of bricks of the older temple and slates of the area. The popular masons of 1944, led by Andreas Regkoukos from Melissona, followed the plan of a cruciform church on the ground floor, while they placed a dome on the roof. The choice was bold, since the domed temples in Evia were not usual and connect the temples with a dome and the cruciforms. Interesting folk-style paintings are preserved inside the walls. The coincidence of the 1944 repair with the liberation from the Germans, leads to the hypothesis that the repair was probably done as a fulfillment of a promise or vow.

Behind the sanctuary of the temple, begins a dirt road that leads to the rocky hill of Filagra that dominates the landscape. The ascent to Filagra is made by an uphill path that starts from the access road that surrounds the steep hill. The view from above (300m.) is panoramic to the sea, the east coast of Evia and the mountains around Giannitsi. The amazing position of the hill and the natural fortification offered by the cliffs, were used from antiquity until the time of the Ottomans by the rulers of the island. On the south side, the walls of the castle can still be seen. The name Filagra comes from the name Fylaktra, because the fort effectively controlled the sea on the southeast coast of Evia and then communicated with signals to the castles of Karystos and Styra through intermediate forts. The southeastern coast of Evia was known in antiquity as Koila of Evia, which owes their name to the convex shape of the southeastern coast of Evia rather than the existence of a port. Koila of Evia are mentioned by many writers of antiquity with awe for the strong dangerous winds that caused shipwrecks. Filagra, at times in the Middle Ages, was a stronghold of revolutionaries or pirates for raids against the castles of Karystos and Armenos. From the castle, starts an underground gallery that ends at the sea. According to the legend, the Turks, in order to occupy the castle, threatened a young woman who was washing her clothes in the river to show them the secret passage and so they occupied the castle. Since it was not handed over to them by the Franks like the rest of Evia after the fall of Chalkida (1470), it is possible that it was owned by pirates. But apart from being a fortress, Filagra was also a sacred place where pagan ceremonies were held to clear the strong winds. Today there are two small churches.

For the return, we followed the same route. The hike was completed comfortably in 3 hours.