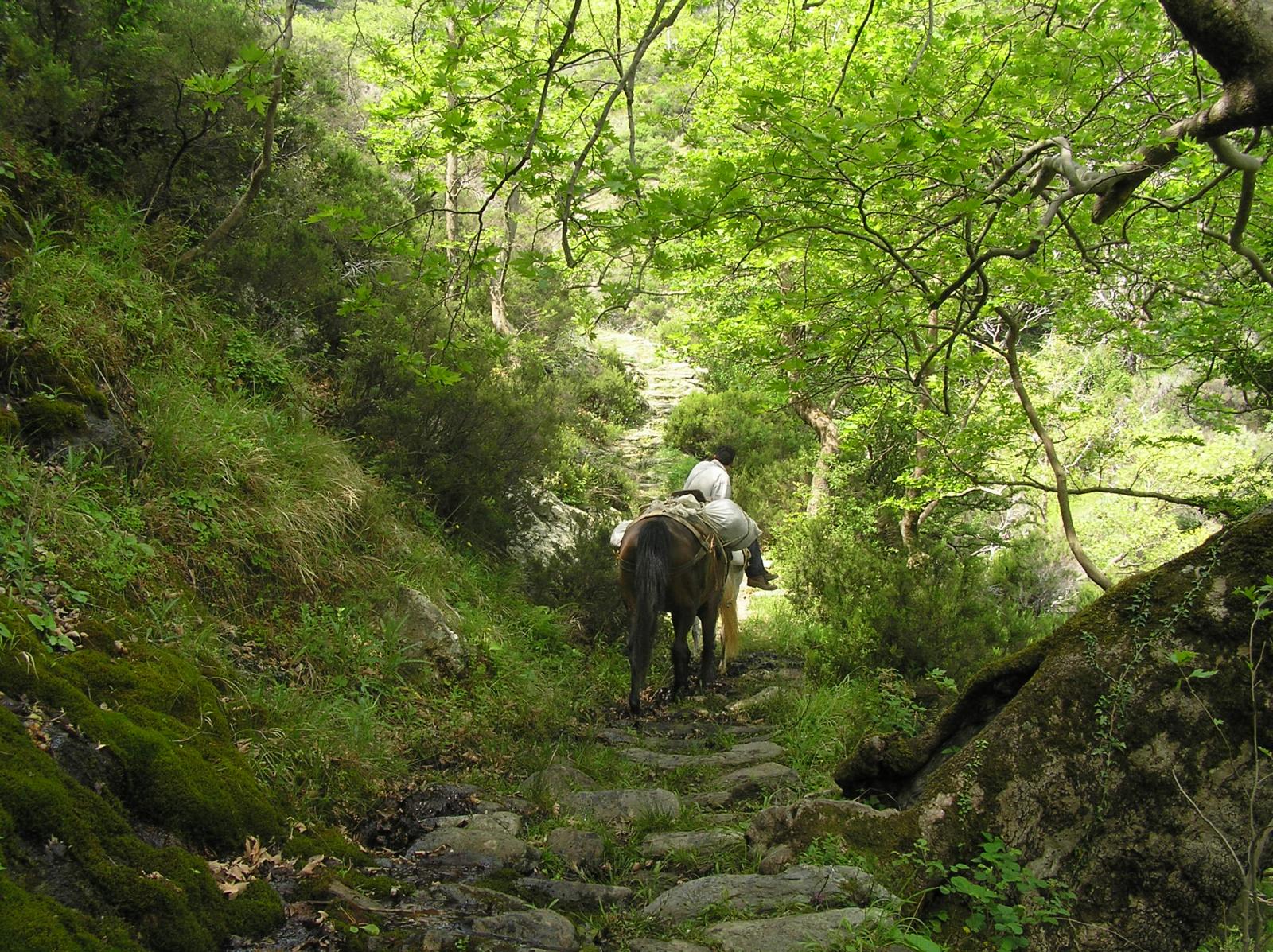 The ravine of Dimosari is located on the NE side of Ochi and starts from 800m. at Petrokanalo to end at the sea where the settlement of Kallianou is located. The homonymous river is accompanied by a clean path that in some parts is paved or forms a wide cobbled path. In the settlement of Lenosaioi, the path stops and the road that starts away from the river begins. The route of Dimosaris was a main axis of communication between Kallianos and the villages of Karystos at least since the Middle Ages. The name Dimosaris is also related to the public, the public road or property. The green nature of the ravine and the alternation of the landscape with the waters that form small waterfalls and swimming pools, have made Dimosaris a tourist attraction of the mountainous nature of the area. 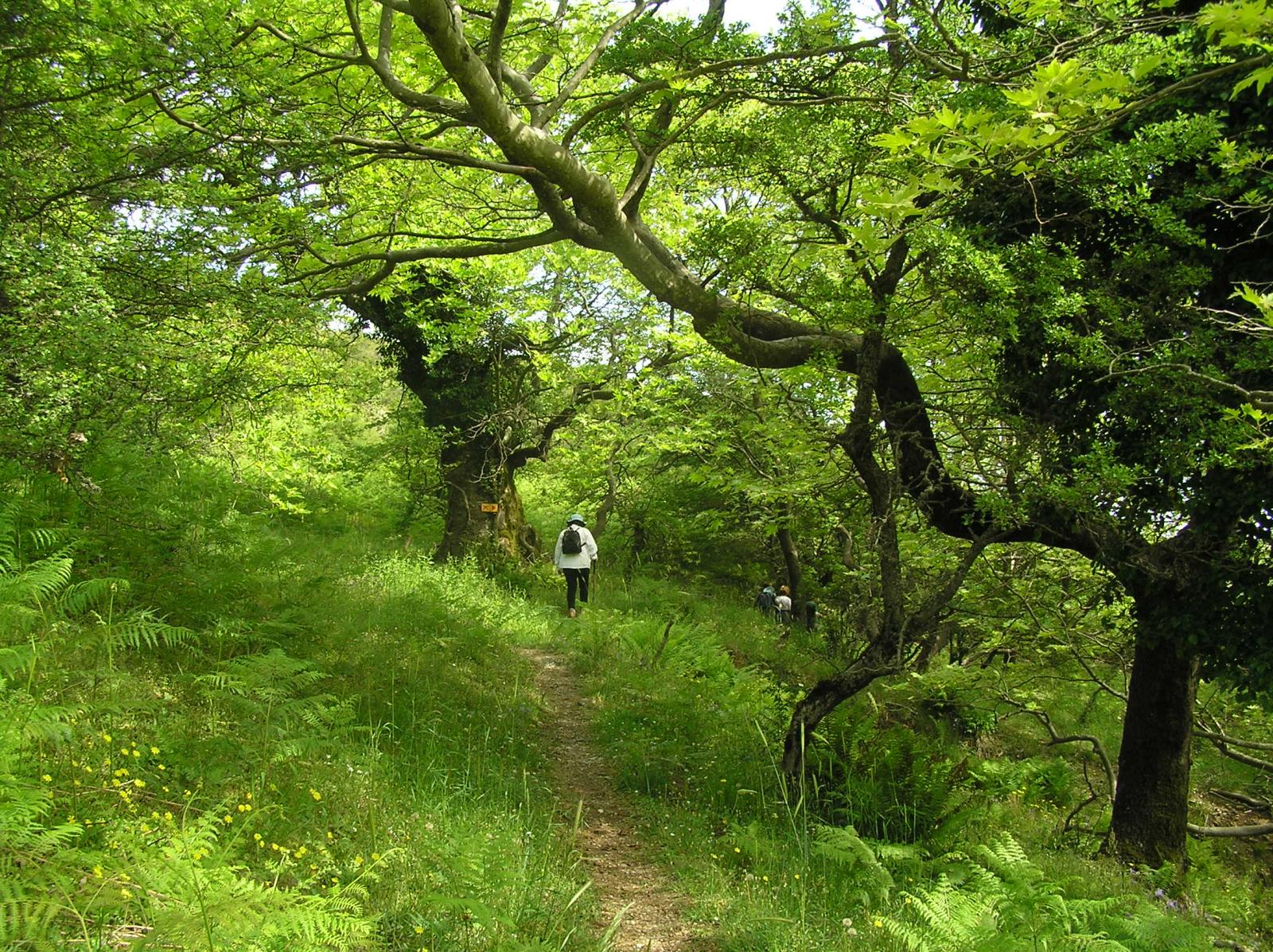 The ravine forms a multifaceted mosaic of vegetation that is perhaps the best example of the Ochi area. In the higher places we find remnants of forest trees with sporadic chestnuts, rowan (Sorbus aria), oak and maple. The steep dry slopes up to 900m. covered with extensive and dense evergreen-oak forests or bush heaths. The riparian plane trees (Platanus orientalis) start at 1200m. with low trees, while as we descend the banks of the river are covered by dense and tall plane trees. The wooded slopes above the river continue throughout the gorge and include dense holly, meleu, wild olive trees and evergreen-oaks. We also find sporadic trees with bearberry and open glades with harvested ferns. Approaching the sea, the forest vegetation gives way to brushwood that can withstand the drought and the saltiness of the sea.

In the heart of the ravine there is still the abandoned village of 'Babades', a small paradise on fertile ground. The inhabitants cultivated mulberries, cherries, apples and excellent vegetables.

The variety of vegetation and landscapes in the ravine of Dimosaris ensures the conditions for a rich fauna. The Short-toed snake eagle nests in the higher inaccessible places where there are cliffs, while Common buzzards, Eurasian sparrowhawks and Common kestrels often fly. In the forest and near the river, many common song birds such as the Pet-birds (Sylvia), the European robin, the Blackbird, the Nightingale, finches, the Great tit etc make their presence felt with their song. There are still several species of snakes such as the water snake, the Four-lined snake, the Dahl's whip snake, the Eastern Montpellier snake, the Viper and the Balkan whip snake. In the last part of the river live the striped water turtles, frogs and salamanders. 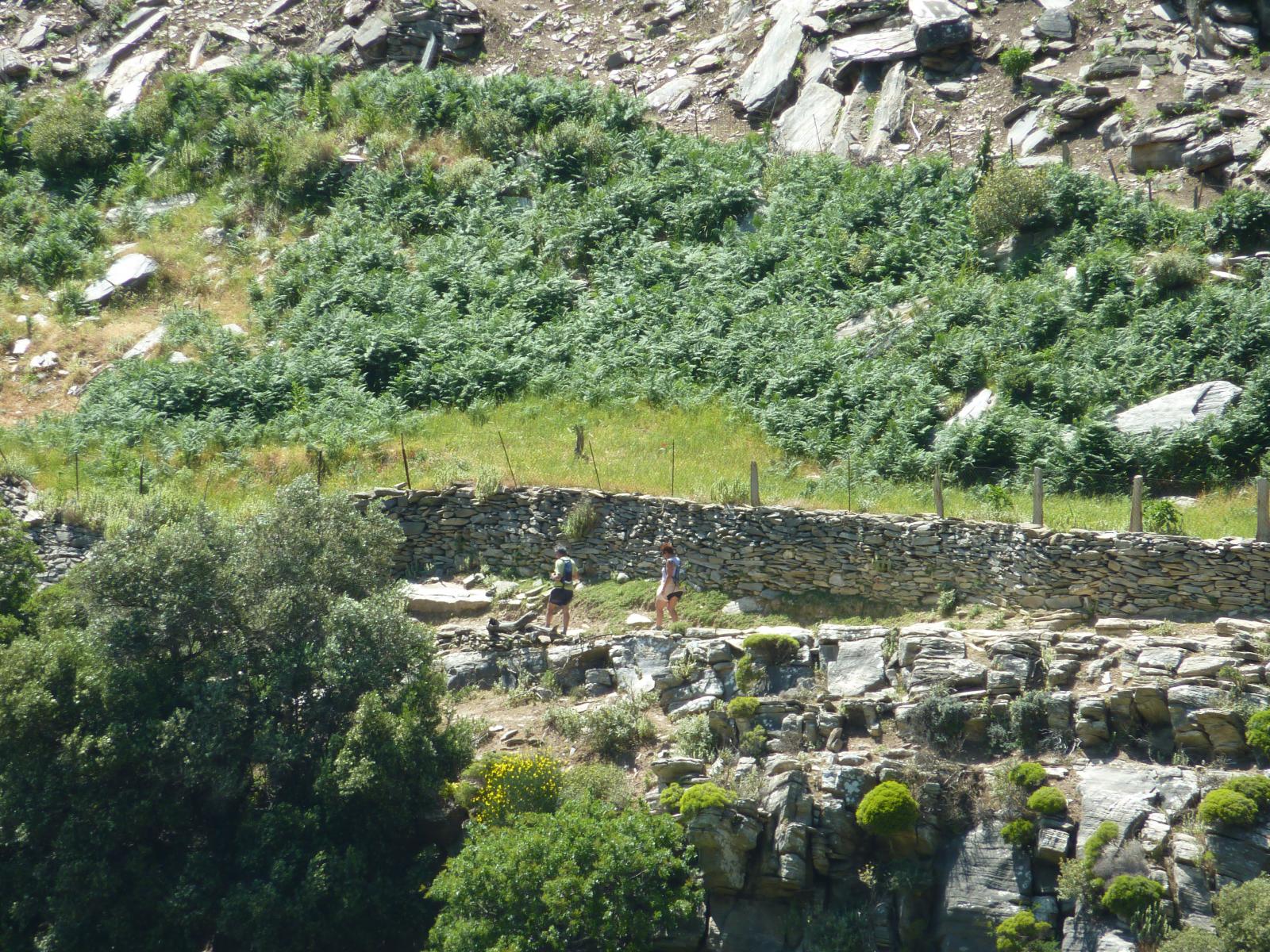 It is an impressive ravine with vertical high cliffs and is located lower than the homonymous village. It flows from the river Porphyra in a direction from West to East and ends at the sea in one of the best beaches in the area, Schinodavlia. A paved path in many places crosses the gorge at the base of the slopes. The geological formations of the cliffs and the view to the sea offer great interest to the visitor. Rare rock-loving plants grow on the limestone slopes, while in the ravine there is forest vegetation with plane trees, evergreen-oaks and oaks. The environment of the gorge favors the birds of prey such as the Peregrine falcon, the Long-legged buzzard, the Bonelli's eagle, the Common kestrel, the rock urchin that pass or live here. 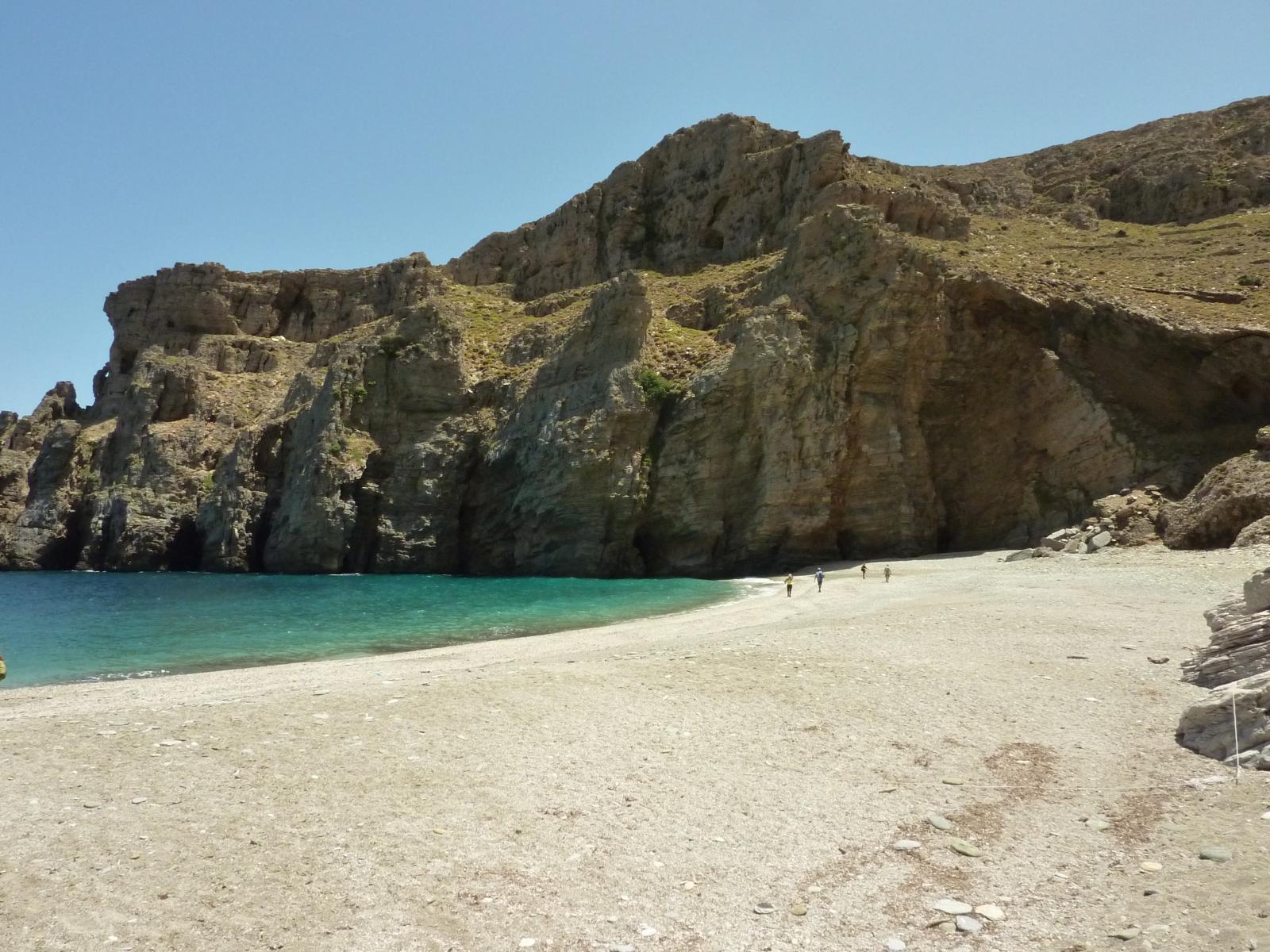 It is located SE of Ochi between the villages of Evangelismos, Thymi and Kapsouri. The gorge forms vertical sharp rocks and turning ends at the impressive beach of Arhampolis which faces the north coast of Andros island. The wild beauty of the gorge and the beach matches the evocative name which means 'ancient city'. The ruins of ancient walls on the slopes and the excavation findings on the beach and in the gorge, reveal that there was an ancient settlement that was associated with metallurgical activities. Traces of rust (molten metal) are clearly visible on the beach. 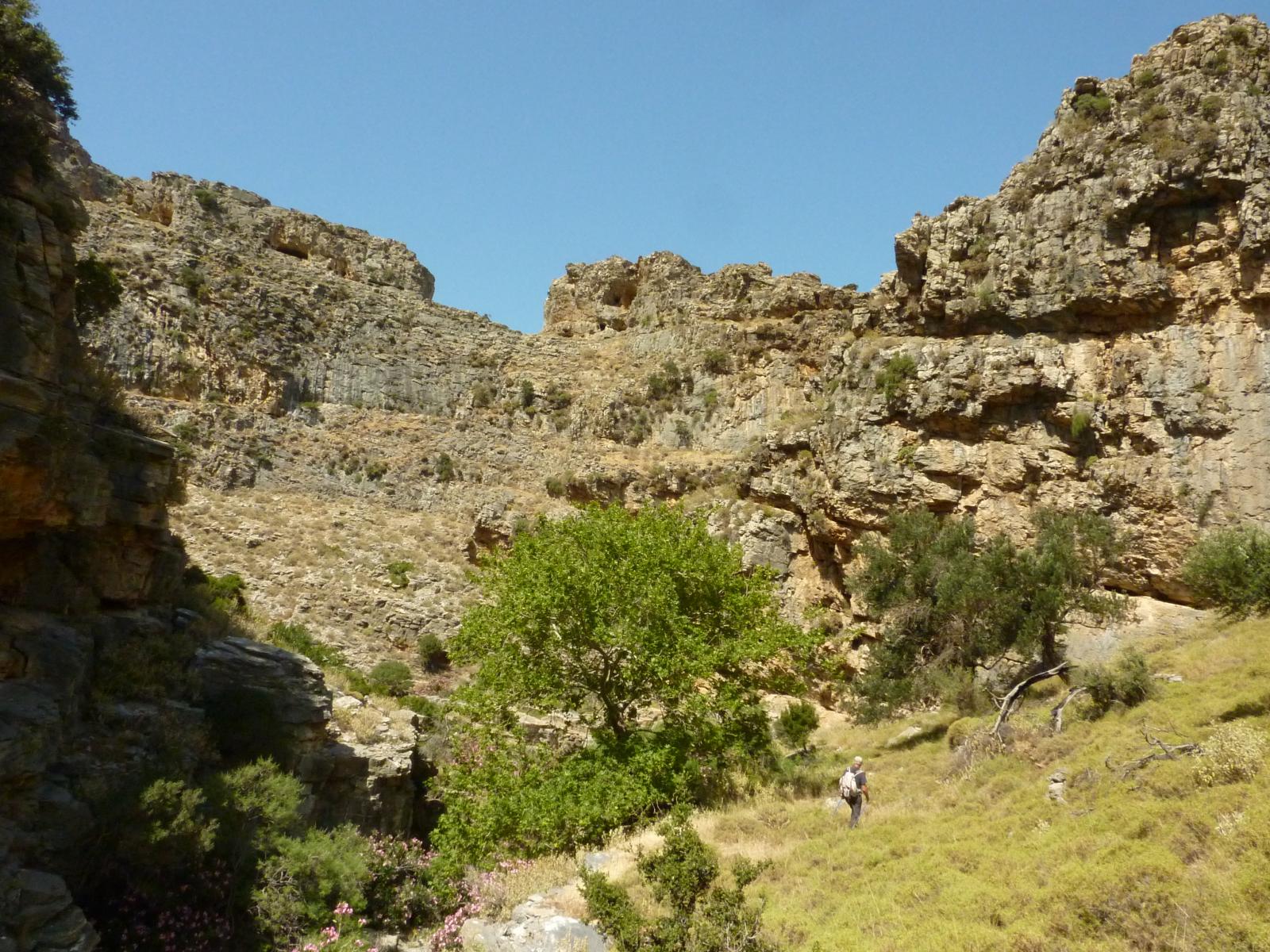 The wild and dry landscape near the coast, favors only brushwood. As we move away from the coast and walk inland, we encounter higher forest vegetation with evergreen-oaks, holly and wild olive trees. Cavities and holes in the wild rocks favor the survival of rare birds such as Rock partridge, Peregrine falcon and Common kestrel. Also rare rock lovers and endemic plants grow in inaccessible places.

To reach the beach we follow a path from Thymi or Evangelismos.