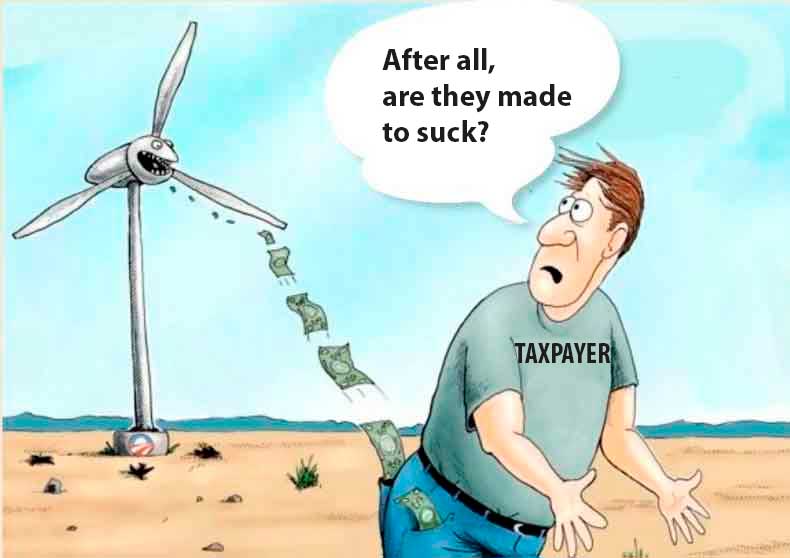 The reason that wind-power plants are useless and "bad" is that they commit funds and eat money but without providing reliable electricity. You just do not know if it will blow in June, you know you want electricity in June, and if it does in June, you will not know what to do with the conventional units that you will have to electrify you. In a network, the supply must be exactly the same as the demand, or we have black out. This forced equation of supply and demand makes wind-power plants harmful. It takes effort to balance variable sources in a network.

The wind-power plants, either in Mani, or in Crete or in Pindos, or anywhere, are a get-rich-quick scheme. They have nothing to do with energy or electricity. They do NOT contribute to the adequacy or reliability of electricity (on the contrary, they consume resources that thus may not be available for something productive).

They exist since 1975 and they have been subsidized since 1990, but, NEVER and NOWHERE have they substituted conventional production nor have they saved measurable conventional fuels.

They neither replace nor save lignite. They do not even save gas, where they were measured. There are ONLY for subsidies and only WITH subsidies.

And the subsidies are so generous that there is a surplus for paid listings (see those who write in favor of wind-power plants). The wind-power plants constitute pocket money for their private owners and aspiring owners of DEI (Public Power Corporation) parts.

There is no one who does not want to get rid of lignite. We have the same opinion. However, we should be concerned about the fact that our almost exclusive wind-power plants supplier, Germany, has not reduced lignite production to a minimum.

Stochastic - random - wind energy can only be used as an adjunct and does not reduce dependence on lignite.
When it is not blowing, when it is blowing a little, or when it is blowing a lot, the wind turbines do not work.
To consider wind energy a safe solution to the energy problem, is tantamount to considering a return to sailing ships, a realistic solution for modern navigation!

Regarding "green growth", the claim that "we are obliged to put β-RES, Europe requires it to reach the 20% target in 2020" is incorrect.
Today we are at 18% when other richer countries such as Luxembourg, France, Belgium and Germany (!) which sell to us at a high price, are far behind.
And it does not share our concern and haste to buy most wind-power plants in Europe (yes, this is who we are).

The electricity produced by the wind-power plants is not intended to meet local needs, but is sold to the Public Power Corporation ('DEI') and enters to its network. In addition, the removal of the giant constructions after their end of operation (approximately 20 years) is not foreseen.

The construction of industrial wind farms has been subject to law 3299/04 which subsidizes them up to 100% of the project, while ensuring the "investors" a fixed guaranteed price of 87.5 euros per megawatt hour for 25 years (law 3851/2010 ). It is easy to understand who bears these costs.

It should be noted here that for the first 42 wind turbines that are planned to be installed in Mani, the cost amounts to 120 million euros, of which 90-100 end up in the German industry for the purchase of equipment and the remaining 20 will be consumed here.
The Special Fee for the Reduction of Gaseous Pollutants (ETMEAR) in our PPC electricity bill, from 0.8 euros per 1000Kw in 2006, now reaches 26 euros.
An average household pays forty euros every two months to the PPC bill, for the wind turbines to turn.
And it will pay even more, because despite this, the deficit in wind-power plants is already 281.24 million euros and is estimated to have jumped to 434.85 million at the end of 2017.
Instead of imagining free electricity when the wind turbines turn, the consumer now sees the taximeter behind it.

And don't forget ... Every Sky (T/N: Greek tv station) and every news website is paid to say or not to say what the payer wants. There is pressure for the wind permit in the Cyclades. There are some pending appeals to the Council of State, the Council of State is supposed to examine formally and procedurally, the installation permits require ... land, and the Greek "investor" has already sold the wind permit which has not been issued to him.
Plus, he is ... an electricity importer and a gas importer. wind-power plants, mean electricity imports and gas imports. You must realize the amount of pressure that has been exerted and will be exerted.