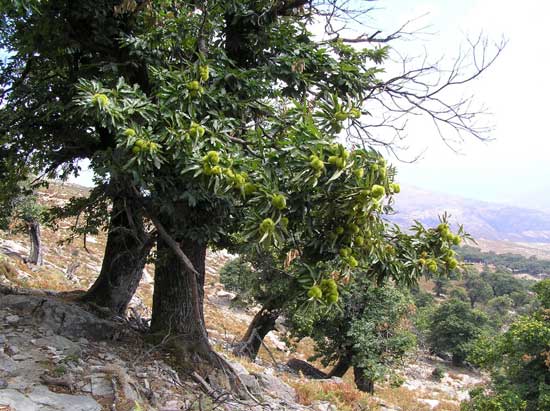 ENEL GREEN POWER HELLAS Ltd. company which has been destroying Ochi for some months now, flattening it's mountaintops, destroying herding lands and blocking creeks in order to construct roads inside the heart of the holy Ochi mountain, so it can carry the wind turbines to it's mountaintops, is trying to acquire a position in the social and economic life of South Karystia, like an Italian benefactor and even a position in our hearts, asking not only for earth and water but our soul as well.

Last day's covert meeting between the ENEL company and five associations of Karystos, was turned into a serious protest, with the participation of many uninvited associations and citizens of our municipality, in spite of the attempts of the company to keep the discussion at a superficial level with some basic benefits of consolation for the productive associations which are harmed by it's works.

This happened because the information leaked from the associations that were invited and the Strife Committee of Associations and Citizens of South Karystia held a meeting and a decision was made for the participation of more people, in order to undo the plans of the company, so the voice of the thinking people of our place be heard and ENEL company realize that it has come uninvited to this place and that it can depart empty-handed.

Representatives of S.P.E.K. (Society for the Protection of the Environment of Karystos) participated in the discussion, with the main purpose of informing our members and expressing the fixed position of our association, that is the CEASE OF THE WORKS of the wind-park companies inside the protected area of the Ochi mountain and generally South Evia, until the licensings of these companies are re-examined, as it is stated explicitly in the voted decision that has been signed by 27 associations of the Karystos municipality and by many citizens.

For us, this company is not welcome to our holy mountain.

Also, we repudiate it's intervention in Kastanolongos (the chestnut-tree forest close to the mountain lodge) for supposed works of "forest protection" and construction of "forest routes" which will become regular roads  for the requirements of it's technical works, very shortly.

We don't trust them and we don't allow them to use pro-environment disquise, in order to do their job.

Let the disguises be uncovered, since their purpose is the profit at the expense of the integrity of the area under protection and of the healthy productive factors of our place, namely, livestock farming, agriculture and tourism development.

IMMEDIATE CEASE OF THE WORKS, NOW
THE STRIFE CONTINUES

Society for the Protection of the Environment of Karystos - S.P.E.K.