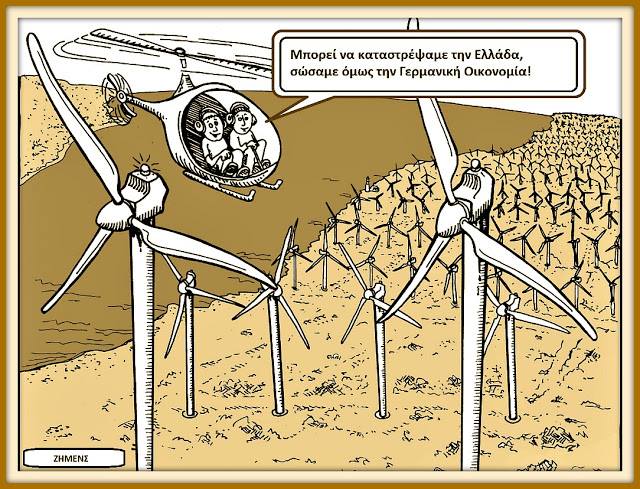 In the caricature above, one person says to the other one: "We may have destroyed Greece, but we have saved the German economy".

In 13th of October, the 'Society for the Protection of the Environment of Karystos' and the 'Front Against Wind Parks' (SPPENK, AMAK) showed the documentary 'The Windbag of Aeolus', by Nasim Alatras, in the Karystos Film Club. Before the onset of the show, there was a briefing concerning the recent activities of SPPENK, like the complaint to the European Commission concerning the lawless concentration of wind power stations inside the protected area of Ochi mountain, the complaint for illegal water pumping done by the wind turbine companies, the publication of the issue to the German press and the complaint to the Environment Inspectors for possible violation of Environmental Conditions from the ENEL company.

The documentary, using technical data from the construction and function of wind parks, searches about the reaction of the local society to the intrusion of wind parks all over the country. The documentary content is based on interviews and personal witness of citizens from different places (Skiros, S. Evia, Kyclades islands, Laconia, Veria, Eurytania, Crete) and their strife and agony is brought forward in order to avert the installation of wind parks at their places.

Watching the documentary, one can distinguish the common elements that connect the 'wind park' cases along the whole country: design and licencing take place in the absence of the local societies, through misty procedures. The inhabitants of these places worry about the repercussions to the natural environment and to their jobs and they feel that precious space from their life and their activities is taken away. They don't have another way of defending their local places except their clash with the authority that imposes them.

The documentary records the various reactions of each local area, but especially for South Evia, the absence of any reaction during the period that it was filmed (2014), is characteristic. Today, while the installation of wind parks proceed fast, the reaction from our local society has started, but remains 'lukewarm' compared with the size of the problem.

The issue in our case is for the people that are silent, to raise their voices, because, the cases of the other places (for example, Skiros, Paros), show that there is no other person to save his/her local place from certain destruction, except it's inhabitants themselves.