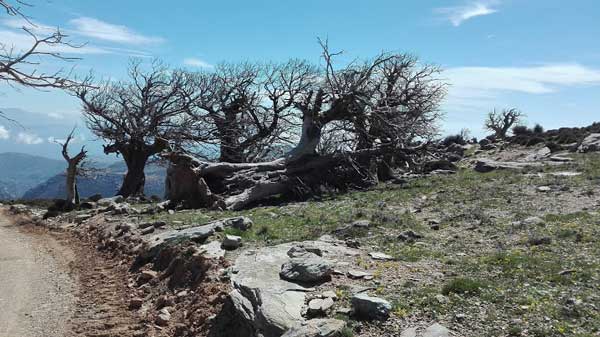 Ochi mountain and Cavodoro area are destroyed at a fast pace, day by day. After the onset of interventions on the mountain (24th of January, 2018), a tragedy is in advance, where everything is destroyed (view more photos). New roads are continuously cut and untrodden mountain-tops are flattened.

The Ochi mountain-top has been surrounded with a road that leads to Petrokanalo, The Samari location is being destroyed with explosives, the Anemopyla location has been scored with two roads, also two roads have been cut underneath the Lakka Mpoukoura location...The slope of the roads can cause them to collapse during the first rains. They have cut down centuries-old  sycamore trees in Stavro Komitou and they have taken down on the ground an age-long dead chestnut tree, close to the mountain lodge. In Milia they are setting up a cement-production unit  They are constructing a high-voltage substation in Agios Mammas location and they are raising power masts one-by-one, which will be traversing through the whole CavoDoro area. The works are being guarded by a private company that doesn't allow access to anybody.

While a company destroys brutally the natural heritage of the place we live, the local community reacted in unison for the first time. Twenty eight local associations voted in the municipal board (28 March 2018) for stopping the destruction and the company works, until their licencings are re-evaluated.

The municipal authority has given promises, but refused to  authorize the break of the works. It continues to ignore the crime that is taking place against the Ochi mountain and Cavodoro area, as well as the heavy repercussions that await us.  We are threatened with natural catastrophes, extinction of water fountains and fires. Tourism, stock-raising and bee-keeping are being removed from the mountain, which is turning into a private area that is strictly guarded. The CavoDoro area is about to become uninhabited.

Currently, just one company is starting works concerning the installation of 73 wind turbines. What is going to happen when the rest of the companies start their works?

In CavoDoro area, TERNA and RF Energy companies with 52 and 75 wind turbines respectively and in the rest places of the Karystos  municipality, 20 new wind farms which will be connected with the high-voltage line Polipotamos-Platanistos. The worse is to come.

There is an urgent need for all of us that live in this place, to move to action at once and demand to stop the over-concentration of wind turbines in South Karystia area.

For the administrative council