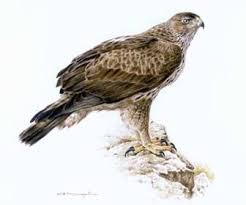 Ochi is of increased ornithological interest with 211 bird species observed. Of these, 80% are migratory species because the area is on a migration corridor and is used to supply many species that cross the sea. The cape of Kafireas, the shores of Kavodoro, the peaks of Ochi and the plain of Karystos offer opportunities to observe migratory predators, ostriches, waders and aquatic birds. The best time to observe migratory birds is in the spring, when they move north to their nesting sites or in the fall when they fly south to their wintering grounds in Africa.

The area also serves for some birds as a communication corridor between Central Greece and the Aegean islands. Some forest ostriches and predators that grow in the area are likely to then spread to the Cyclades.

Many species such as Petroperdika (a species of partridge) have suffered population decline while others such as some birds of prey are disappearing rapidly. For example, the Vulture and the Golden Eagle no longer nest in the area. Even the aquatic and coastal birds have been reduced along with the wetlands of the area. In order for bird populations such as partridges to recover, their habitats need to be protected.

Common causes of declining and declining bird populations include uncontrolled mountain roads, hunting, wetland rubble and fires. All this is intensified and increased by the infrastructure projects for the installation of wind turbines that lead fatally to the further degradation of bird habitats.